duration
3 hours 0 minutes | 2 intermissions
composer
Giacomo Puccini
libretto
Luigi Illica and Giacomo Giacosa according to David Belasco
World premiere
17 February 1904
Polish premiere
Warsaw, 1908
premiere at the Krakow Opera
25 September 2009
language
Sung in the original Italian, with Polish subtitles
description
One of the most beautiful stories of unrequited love. It tells us of Geisha Cio-Cio-San’s passion to a US Navy Lieutenant which ends tragically for the girl owing to cross-cultural misalliance and differences. Since the 1904 premiere, the opera has belonged to the world repertoire. It has always been an ambition of the greatest soprano voices to interpret the main role. Obviously, the figure of Butterfly dominates the opera, and the scale of passions involved in that role contains anything from joy and love to longing and depression to despair and resignation. 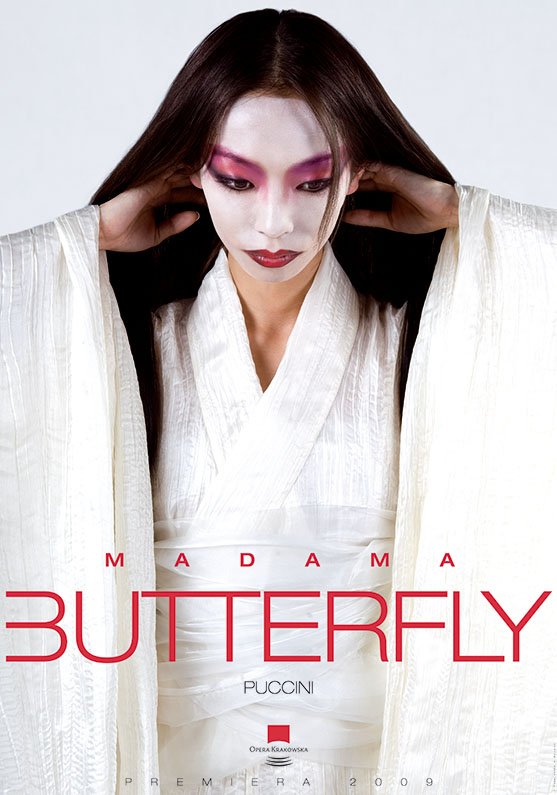 A Japanese marriage broker, Goro, shows a new house on a hill overlooking Nagasaki to Lieutenant Pinkerton from the US Navy, and introduces the servants of Pinkerton‘s future young Japanese wife. One of the maids is Ms. Suzuki. Pinkerton is very happy of the events (Dovunque al mondo - Amore o grillo), welcomes the American Consul Sharpless, and raises a patriotic toast with him. Sharpless is concerned about Pinkerton‘s marriage with a geisha, especially after the bride has visited the Consulate, proving her unconditional love and credulousness. Pinkerton, however, perceives his “marriage” as an exotic joke, thinking rather of his real American fiancée. The bride appears in her love nest surrounded by her large entourage (Ancora un passo or via). Her name is Cio-Cio-San, or Butterfly, and she is 15. She origins from a “once wealthy” family, but presently she works as a geisha to support her dignified mother after her father died. Sharpless, moved by the girls beauty and simplicity warns Pinkerton yet again, mentioning that the girl is serious about his masquerade, but the Lieutenant does not care. Hiding his smile, he accepts honours of the bride’s large family, while the bride receives a number of woman’s objects, including a mysterious box with equally mysterious contents. Goro reveals to Pinkerton that a dagger is inside, the one the Emperor sent once to Butterfly‘s father, with an order to commit suicide immediately. Having signed a marriage contract, the bride protests against her friends calling her “Madame Butterfly”. “Madame F.B. Pinkerton!” she corrects them sternly. The wedding atmosphere is suddenly interrupted by a figure full of dread and majesty: uncle Bonzo, accusing his niece of having renounced her ancestors’ religion. Uncle Bonzo and the whole family disown Butterfly, and Pinkerton asks them to leave his house. He remains alone with his shocked wife, consoling her (Bimba, bimba, non piangere). When Suzuki says her evening prayers, Butterfly and Pinkerton prepare for the wedding night.

Suzuki keeps praying, but she rather asks the gods to dry out Butterfly‘s tears. Although the Consul pays for the rent, money quickly ends, and Pinkerton fails to come back. The maids’ and friend’s scepticism is opposed by Butterfly‘s belief and trust (Un bel di, vedremo). Suzuki departs, leaving Butterfly in the company of the Consul who has arrived with Goro. Sharpless received a letter from Pinkerton, and we can learn from the conversation that the faithful Japanese wife has been waiting for her husband for three years. Butterfly complains about Goro‘s insistence on proposing new husbands, although he knows that she is married. The most recent suitor is Prince Yamadori who chased away his other wives out love to Butterfly. Goro reminds that, according to the Japanese law, abandoning a spouse is equivalent to divorce, but Butterfly considers herself to be a subject of the American law which does not recognize such barbarous customs, and she turns down Yamadori’s courting. Sharpless finds it difficult to control his passion. Once the intruders have left, Butterfly remains with the Consul (Ora a noi) who finally reads Pinkerton‘s letter announcing his quick return, although excluding his meeting with his “wife”. When Sharpless notices Butterfly‘s reaction, he stops reading and asks, before coming to the worst message, what she would do if Pinkerton failed to come. Her answer is short and clear: she would either go back to her previous profession, or, better yet, die. Desperate Sharpless begs her to accept Prince Yamadori’s proposal, but indignant “American wife” shows him the door. It is obvious that Butterfly has understood that her husband abandoned her. But will he leave his child, as well? Stunned Sharpless notices a small boy, with fair hair and blue eyes, whom he never saw before. The Consul leaves the house quickly, while Butterfly chases Goro away again. Suddenly, a harbour cannon shot announces the arrival of a warship. The ship is bright, and the flag is waving in the air. It is “Abraham Lincoln,” Pinkerton‘s ship. Butterfly is elevated with happiness: she was right, while all others were lying! Together with Suzuki, she decorates her house with flowers (Scuoti quella fronda), dresses her son in the best suit, makes small holes in the walls to follow her husband’s arrival, sits and waits. Suzuki and the boy fall asleep of tiredness, only Butterfly is vigilant, motionless.

At dawn, Butterfly takes her child and puts him to bed. At that time, Suzuki receives Pinkerton and Sharpless, and explains to them that Butterfly spent her sleepless night waiting. Having noticed the decorated house, Sharpless understands what he has done. Muffling her angered shout, Suzuki notices another person in the garden: Mrs. Kate Pinkerton! The worst is coming: to ensure future for his son, Pinkerton has actually arrived to take him away from his mother. However, shocked and dubious, he is unable to do it and runs away (Addio, fiorito asil). Butterfly senses his presence and enters the room. For a moment, she thinks it is a game and starts looking for her husband until she notices the woman in the garden. Several quick questions asked of Suzuki are enough for her to understand. She is ready to give her son away if Pinkerton himself comes to pick him up. Sharpless and Kate leave, while Butterfly orders Suzuki to slide close the walls of the house and go to see the boy playing in the garden. Then, she kneels down in front of Budda’s figure, retrieves her father’s box and turns the dagger against her breast (Con onor muore). Trying to prevent the deed that she easily sensed, Suzuki opens the door and lets the boy in, pushing him into his mother’s arms (Tu, tu, piccolo Iddio!). However, Butterfly kisses her son, puts a doll and an American flag into his hand, and hides away behind a screen. We can hear a falling dagger. Deadly injured, she is crawling to her child to kiss him the last time, when suddenly the door opens. Pinkerton and Sharpless get inside, facing the terrible scene. Butterfly raises her hand, passes the boy to them, and dies.