duration
3 hours 0 minutes | 1 intermission
composer
Vincenzo Bellini
libretto
Felice Romani
World premiere
Milan, Teatro alla Scala, 26 December 1831
Polish premiere
Warsaw, 1843
premiere at the Krakow Opera
27 October 2017
language
Sung in the original Italian, with Polish subtitles
description
The titular heroine is an archpriestess torn between her love for a man, a Roman invader, and her service to her own community. In Laco Adamik’s interpretation, the problems of power and servitude of the nation are the backdrop of the grand drama of love experienced by the protagonists. Love and betrayal, jealousy and lust for vengeance, combined with pride and nobility, that determine the course of action for the characters, show the depths of their humanity, but are to the same extent destructive, and lead everything to a disaster. The director follows the music, which wonderfully expresses the power of emotion and strength of character.

“Norma” is thought to be a perfect opera, Bellini’s demonstration of inexhaustible musical invention. Only the skilled voices dare to take on the part of Norma. It is believed to be the most difficult soprano part. In our staging, it will be sung by Katarzyna Oleś-Blacha and Karina Skrzeszewska. 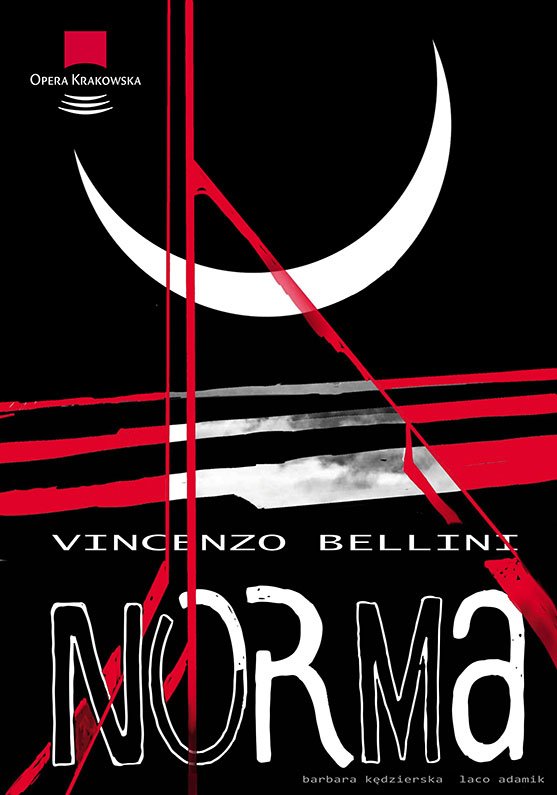 The Druid’s sacred grove. Oroveso and the priests and warriors await the moon to come up, as that is when the priestess Norma is to perform the ritual cutting of mistletoe from the branches of the sacred oak tree. They are also on the lookout for a sign from the god Irminsul, who will call them to battle the hated Romans.

Under the cover of night, Pollione arrives at the grove. His companion Flavio thinks they have come to Norma, Pollione’s lover and the mother of his children. However, Pollione admits that his heart now belongs to the beautiful priestess Adalgisa (the aria “Meco all’altar di Venere”). Trumpets sound the return of the Druids, but although Pollione wants to stay despite their arrival, Flavio makes him leave.

Norma cools down the war fervour of the Druids — it is not yet the time for vengeance. She prays for peace (the aria “Casta diva”), and when the gods demand Roman blood, she calls on the Druids to fight. In truth, she seeks to protect her love.

Adalgisa begs the gods to free her from her love for Pollione, and begs the man himself to leave her be. But Pollione does not quit; he is heading to Rome soon, and wants Adalgisa to come with him. The priestess initially refuses his pleas, but eventually submits. She promises to meet him the next day (the duet “Va crudele, al dio spietato”).

Norma’s dwelling. Clotilde witnesses the suffering of Norma, who both loves her children and despises them. Moreover, Pollione is to return to Rome, and Norma does not know what will become of her. Adalgisa asks her for support. She tells her about the love she feels, a feeling unworthy of a priestess, and Norma remembers her own experiences (the duet “Io fui così”). She wants to forgive Adalgisa and free her from her vows of chastity. She asks her about the name of her lover. Adalgisa points to Pollione, approaching just then. Norma accuses him of infidelity and betrayal, but orders him to leave with Adalgisa, even though Adalgisa rejects him. Norma pledges revenge.

Norma’s dwelling. The children are asleep; Norma has decided to kill them, then die herself, but she cannot bring herself to commit the crime. She asks Clotilde to take the children away, and she asks Adalgisa to look after them after Norma is dead - perhaps at her side Pollione would become a better father to them. Adalgisa refuses and promises Norma that she will return her lover to her (the duet “Mira, o Norma”).

The Druids’ grove. Oroveso announces to the gathered audience that a new Roman proconsul is to arrive soon. The peace cannot be maintained anymore, but the signal to wage war has not been sounded from the temple yet.

The temple of the god Irminsul. Norma waits for Pollione, who is to return to her at Adalgisa’s request. But instead, only Clotilde arrives. Norma understands her hopes were futile. She strikes the gong that calls the Druids — the time has come for war against the Romans (the choir “Guerra! Guerra!”). Pollione has been found in the temple. The Druids want to kill him, but Norma decides to speak to him — she can save him, on the condition he renounces Adalgisa. Pollione refuses. The means Adalgisa is to be executed; Pollione offers his life instead, but Norma announces here decision: the gods require a sacrifice to be made of the priestess who betrayed her country and broke her vows of chastity. The crowd demands to know her name. Norma declares: “I am she!” Pollione comprehends the nobility of her act and decides to die alongside her. Norma asks her father to spare her children. Oroveso refuses at first, but moved by her words agrees to do so. Norma and Pollione go onto the pyre.