duration
2 hours 30 minutes | 1 intermission
composer
Gaetano Donizetti
libretto
Felice Romani
World premiere
Milan, Teatro della Canobbiana, 12.05.1832
Polish premiere
Lviv, Teatr Miejski, 10.03.1838
premiere at the Krakow Opera
2.12.2012
language
sung in Italian with Polish subtitles
description
The pearl of the Italian opera buffa. The romantic adventures of the characters find a happy ending owing to their faith in the magical power of a mysterious potion as well as their firm conviction that the world is subject to an eternal order, which also includes tolerance for the weaknesses and errors of human nature, and love and kindness overcome. The piece, praised for the perfection of the script and the psychological credibility of the characters, still has something elusive about it, evoking melancholy and longing. The music is distinguished by subtlety, moodiness, and sparkles with inventiveness.

"The Love Potion" is the first piece by Donizetti to achieve European fame. After the premiere in Milan in 1832, it immediately conquered the stages of Italy, then of Europe and the world. It was triumphed by such notables as Enrico Caruso in the staging of La Scala from 1900 conducted by Toscanini, and closer to our times, Luciano Pavarotti or Placido Domingo. To this day, opera is still on the agenda of the greatest theatres. Fans of this title had the opportunity to watch a broadcast of a performance from the Metropolitan Opera a few years ago with Anna Netrebko in the role of Adina, Matthew Polenzani as Nemorino, and Mariusz Kwiecień as Sergeant Belcore. “Una furtiva lagrima”, considered a test of a tenor bel canto, is one of the most famous and beautiful male arias in the world opera repertoire. 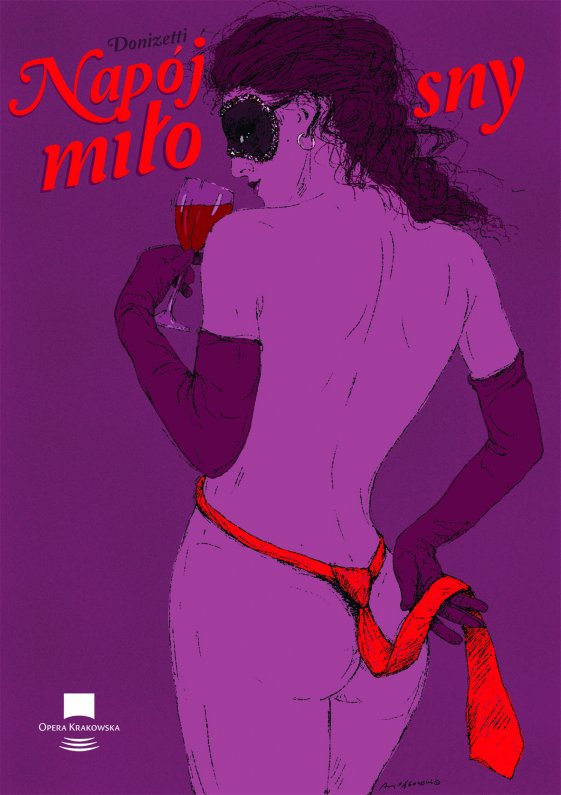 Gianetta and the harvesters are taking a break. Adina is reading, watched closely by Nemorino, in love with her and saddened by the fact that she doesn’t take him seriously (aria, ‘Quanto è bella’). Adina is amused by the legend of Tristan and Iseult and their love potion, which she has just read about. If only we could get this recipe, she says in jest. Nemorino feels that such an elixir would be very useful to him. The sound of drums announces the advent of a detachment of soldiers. They are led by Sergeant Belcore, who instantly proceeds to court Adina and goes as far as proposing to her. The girl avoids giving him a straight answer but allows the soldiers to rest in the village as she sends the harvesters back to work. Thus Nemorino gains an opportunity to confess his love to Adina but her reply is that she’s unable to give her heart to one man: she may be as inconstant as the wind but this is what makes her free (duet, ‘Chiedi all'aura lusinghiera’).

Curiosity compels the villagers to assemble upon the arrival of Dulcamara. The dottore enciclopedico , as he describes himself, has medicines for all conceivable ailments and diseases (cavatina, ‘Udite, udite o rustici’). The villagers are enchanted, even more so by the reasonable prices of his medicaments. Nemorino requests a potion that will awaken love. For a small price, the medicine man sells him a wondrous elixir (actually a bottle of poor wine) that will take effect twenty-four hours after taking it. Nemorino drinks all of it at once and feels so happy that he no longer pays much attention to Adina as he believes that her love for him will be enkindled the following day anyway. Adina suspects that Nemorino has ceased to love her and therefore, when Belcore reappears, she says she may marry him within a week, which makes Nemorino laugh. A few soldiers arrive with new orders: the detachment is to leave the village the following morning. Adina decides the wedding should take place immediately. A desperate Nemorino implores her to wait for one day: believing that the potion will have taken effect by that time, he tries to convince the girl she’s going to regret her hasty decision. Adina wants to teach him a lesson so she asks Belcore to send for a notary and invites the whole village to the reception. Nemorino summons Dulcamara to help him, much to everyone’s amusement.

During the wedding breakfast, Dulcamara entertains the guests by singing a barcarole about an old senator and a beautiful lady gondolier, with Adina as a second voice. As the notary has arrived, Belcore proposes to sign the contract but Adina delays the ceremony because Nemorino is not around, and she wishes to use it as her revenge against him. In the meantime, Nemorino, certain that all is lost, implores Dulcamara to give him another bottle of the love potion. Unfortunately, he has no money to pay him, and the quack gives him very little time to obtain it. Luckily, Belcore arrives and complains about Adina’s postponement of the marriage till the evening. On hearing about Nemorino’s financial problems, the sergeant offers to enlist him in the army: he will receive a soldier’s pay immediately and is bound to be attractive to girls once he starts wearing a uniform. Nemorino knows that soldiering is a hazardous occupation but hopes to win the heart of Adina still before marching out of the village, so he signs the papers and takes the money.

An excited Gianetta tells other girls that Nemorino’s rich uncle has just died and left him a fortune. When Nemorino arrives, already somewhat intoxicated by the excessive intake of the potion, all the girls begin to flirt with him; unaware of his inheritance, he believes this has been caused by the elixir finally taking effect. Adina finds out from Dulcamara that Nemorino has sold his freedom to obtain the love potion. She begins to understand that her actions have been wrong, and Dulcamara, seeing that she’s in love with Nemorino, offers her the potion as well. The girl, however, believes that her pretty eyes are a surer way to a man’s heart. Nemorino hopes that the tear he’s seen on Adina’s face may be proof of her love for him. Otherwise, death is his only way out (aria, ‘Una furtiva lagrima’). Adina has redeemed Nemorino’s enlistment papers from Sergeant Belcore, but the youth declares that he prefers a soldier’s death over a life without love. Only then does Adina confess her love for him. Belcore tries to cheer himself up: the world is full of beautiful girls. And the happy union of Adina and Nemorino gives Dulcamara more opportunity to brag about his marvellous elixir of love, which not only brings love but also riches to those who drink it.