duration
3 hours 45 minutes | 2 intermissions
composer
Jacques Offenbach
libretto
Jules Barbier and Michel Carré based on stories of E.T.A. Hoffmann
World premiere
Paris, Opera-Comique, 10 February 1881
Polish premiere
Lviv, 1884
premiere at the Krakow Opera
9 June 2017
language
Sung in the original French, with Polish surtitles
description
One of the most intriguing operatic pieces that allures with mystery and offers endless interpretations. The dream of producers and performers. But also a challenge. Authors of the staging reach to the fantastic stories by E. T. A. Hoffmann (1776-1822), which inspired Offenbach’s opera. By introducing us to the modern worlds of civilisation, real however looking ahead, they translate them into the contemporary language. Realism and fantasy, contemporaneity and a futuristic vision – this is the poetics of the staging. In terms of music, the performance presents a selected version of the opera which, after all, was not finished by the composer. Except for the best known “Barcarolle” and “Olympia’s Aria”, we are going to hear plenty of other magnificent arias and terzettos, pastiche and parodies, which build up the musical world of the piece. 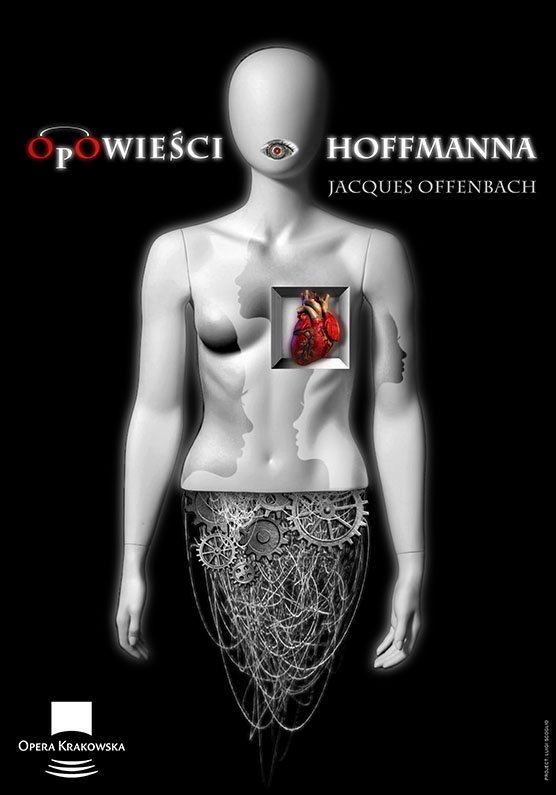 In Luther’s tavern, just next door to a theatre, Spirits of all fine alcohols expect guests. The Muse waits for her protégé – poet Hoffmann. His fate is about to be determined here and now. The problem is that the Muse has a bitter rival: Stella, the star of Mozart’s Don Giovanni staged at the moment in the theatre. To push Hoffmann in the right direction, the Muse takes the appearance of his dear friend, Nicklausse. There will be also another competitor in the battle over Hoffmann’s soul: Lindorf, a wealthy and powerful councillor, willing to steal the singer from the poet. Having bribed her servant, the stammering Andrès, Lindorf intercepts a letter intended for Hoffmann, requesting a meeting after the performance, and the key to the desired chamber. The councillor looks nothing like Apollo, however other arguments speak for him. The first act of Don Giovanni is over and the tavern becomes full of young people from the gallery. Hoffmann joins them with Nicklausse after a while. After a couple of beers, friends urge the poet to sing – the song will be about the horrible and grotesque dwarf Kleinzach. In the very middle of the second stanza, Hoffmann gives in to an overpowering impulse, abandons his hero and starts singing about some heavenly creature. Brought to heel, he finishes the story about the monstrum and at the sight of Lindorf, Hoffmann enters a verbal duel with him concerning the matters of the heart, and all of a sudden mentions the three greatest loves of his life. “Three?,” asks Nicklausse surprised and the entire company insists on the story about those crazy passions. That night, nobody would return to the opera... Once he confirmed his companion that before the sunrise everything would become clear, Hoffmann begins: “The first one was called...”

Professor Spalanzani contemplates delighted his sleeping daughter, Olympia. The dearest daughter of all, since worth millions! He is going to throw a grand ball for her, as her success would allow him to recoup the half-million-ducat loss incurred due to the bankruptcy of banker Elias. Let’s only hope that Coppélius doesn’t claim his share in paternity rights! Spalanzani welcomes frantically his devoted and obedient student – poet Hoffmann – who became suddenly overwhelmed by a passion for physics... However, as soon as the professor disappears in the company of Cochenille, his stammering servant, Hoffmann reveals the secret of his scientific interest: it is, obviously, all about Olympia. Grinning ironically, Hoffmann’s friend Nicklausse hides something about her. Coppélius arrives and claims to be “mfriendo mista Zbalanzani” and an optician. He sells Hoffmann a pair of magic glasses that highlight Olympia’s fair beauty. In the meanwhile, guests arrive and the party begins. The entrance of Olympia is an object of everyone’s admiration. In order to deserve the applause even more, the girl strikes up a grand coloratura aria where her weaknesses go unnoticed by the listeners and Hoffmann himself, wearing Coppélius’s glasses, is barely able to stand straight due to his raptures. The guests vanish in the dining room, while the poet entrusts his goddess with all secrets of his infatuated heart, not supposing even that their love duet is actually a solo aria... At the moment, however, the house of Spalanzani is ruled over by a mad waltz led by Olympia and Hoffmann. After only a while, the poet is no longer able to keep up with the spinning dancer and falls, exhausted, into an armchair. With a slight gesture, Spalanzani calls his daughter to order. Just as Hoffmann regains consciousness, Coppélius destroys the wonderful Olympia into pieces. Hoffmann’s ideal woman was a mechanical doll. The guests burst with laughter.

Antonia, the daughter of councillor Crespel from Munich, plays harpsichord and sings. Antonia’s father forbade her to practice those sinful activities but can you condemn an orphaned daughter of the greatest singer in Germany to silence? For councillor Crespel it is not the only reason to worry about as Antonia is still in love with the goddamn rhymester Hoffmann. Yet the councillor has to go out, leaving servant Frantz, who is as deaf as a post and immensely irritated with his master’s expectations, to look after Antonia. Despite Crespel’s attempts, Hoffmann manages to find the girl. Nicklausse, however, is worried about her: on the one hand, it is true that, contrary to Olympia, Antonia has a soul, but on the other hand, also violin has it. Once he gets rid of the hopeless sceptic, Hoffmann sits at the harpsichord and calls his beloved with its sounds. Their vocal ecstasy results in Antonia’s alarming symptoms. Hoffmann is not able to explain them in time as councillor Crespel is back. The poet looks from hiding at the stormy discussion between the father and the grim doctor Miracle, whom the councillor blames for causing some time ago his wife’s death. Having learnt that the daughter has inherited the disease from her mother, the doctor offers his services to the father. Moreover, ignoring Crespel’s protests, he performs an examination remotely. Having established a diagnosis, the doctor gives the councillor a set of vials with medicines, but this results only in being thrown out. Thanks to the visit, Hoffmann has learnt about the peril hanging over his beloved: singing may lead to her death. He asks her to promise to remain silent and walks away. He doesn’t suspect, however, that he left her at the mercy of doctor Miracle. The medic appears miraculously in the room – is it possible that he passed through the wall? – and hypnotises the victim. To do so, he conjures up the spirit of the late mother who begins to sing with her daughter a deadly duet while the doctor forces his violin to perform insane passages. Intoxicated with superhuman virtuosity, Antonia follows him into the highest registers and falls lifeless. She dedicates her last melodious breath to her despaired father. When he sees the returning Hoffmann, Crespel attacks him fiercely and blames him for the tragedy. When Hoffmann calls a doctor, Miracle appears.

A luxurious gondola swims along the Grand Canal in Venice, carrying the courtesan Giulietta and her company. After two love tragedies, the poet Hoffmann sought escape in drinking and lust. No wonder that he has envious rivals, such as the broke and abandoned Schlemil. Giulietta turns the crashing bore down and invites everyone to the casino. Still deaf to Nicklausse’s good advice, Hoffmann assures him that he is not in love – who would fall in love with a courtesan? He underestimates the power of the mysterious captain Dapertutto – Giulietta’s protector and an incomparable conqueror of defiant hearts. It was thanks to his power over Giulietta that Dapertutto deprived Schlemil of his shadow and now he demands of the courtesan Hoffmann’s mirror image. Having discovered his tragic condition, Schlemil challenged Hoffmann at the green table while Giulietta sings. The poet releases quickly from the demon’s charm, since a much more powerful demon waits for him: love. Schlemil catches Hoffmann and Giulietta talking, raises a scandal and challenges the poet to a duel. The unarmed Hoffmann grabs a sword provided by Dapertutto and kills his opponent, pulling also from him a key to Giulietta’s room. He rushes there immediately. Surrendering to skilful manipulation, Hoffmann gives the deceitful siren the desired treasure that is soon seized by Dapertutto. The bored courtesan instantly leaves the poet. Meanwhile, Nicklausse brings terrible news: the authorities have found out about Schlemil’s death and there is a need to leave the town immediately. Gendarmerie rushes into the stage in search of the murderer (finale: Le voilà!). Unable to stand the contemptuous laughter of Giulietta and devastated with Dapertutto’s provocation, who shows him an empty mirror, Hoffmann attacks the courtesan with a knife but it is the girl’s clumsy jester Pitichinaccio who receives the fatal blow. Giulietta falls despaired on his dead body.

We are back in Luther’s tavern, where Hoffmann just finished his third and last story. Discovering how drunk and desperate his rival has become over the last hours, the councillor Lindorf triumphs: in this condition, the poet won’t be able to fight over Stella, who is wildly applauded after the performance. It is Nicklausse to draw the conclusions from the story: Olympia, Antonia, and Giulietta are the three images of the same woman: the cold, perfect, and corrupt Stella. The primadonna appears in the tavern with her servant, Andrès, but Hoffmann does not recognise her. Out of two evils, he prefers probably Kleinzach! The Muse praises the death of the lover and the birth of the poet.

Piotr Kamiński, “A Thousand and One Operas”, PWM, 2008
(slightly abridged)
see the gallery