duration
2 hours 40 minutes | 1 intermission
composer
Giuseppe Verdi
libretto
Salvatore Cammarano and Leone Emanuele Bardare after the play Antonio Garcia Gutiérrez
World premiere
Roma 1853
Polish premiere
Warsaw 1854
premiere at the Krakow Opera
8.06.2013
description
A story of two brothers, separated by fate and then pitted against each other by their love for the same woman and by political turbulences – both unaware of their brotherhood... The libretto of "Il trovatore", although based on a true story harking back to medieval Spain, torn apart by civil wars, is considered excessively complicated, unclear, mostly for this reason that the events which are the most decisive for the plot take place offstage and are only related by the characters. The great success of the opera stems primarily from the ‘musical and vocal delight’. Contrary to such opinions, using his years of experience as a director, Laco Adamik has put much effort into making the storytelling aspect of the production attractive as well. In his staging, the characters are meaty, the events take on real shape, and a crime once committed entails more wrongdoing, much like in an ancient tragedy. 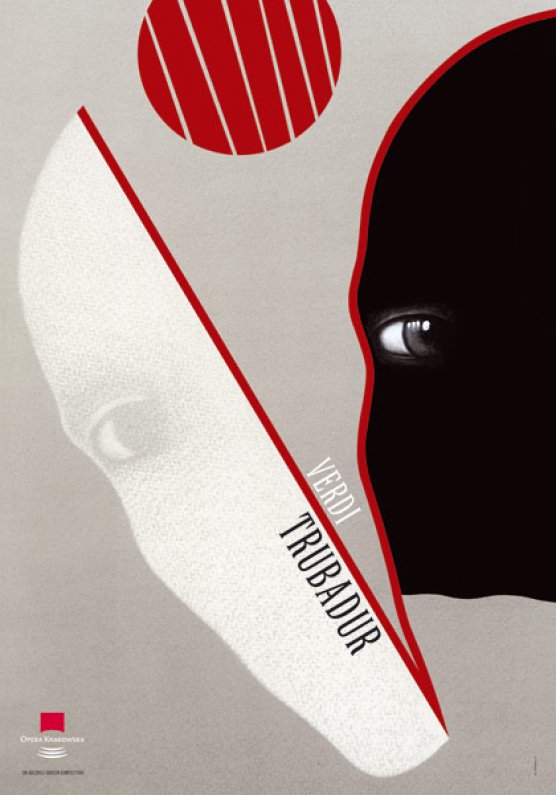 Count di Luna’s castle. Captain Ferrando orders his soldiers to guard the Count, who comes to the garden under the balcony of his beloved Leonora every night. Ferrando imparts the secret of the family to his companions (ballad ‘Di due figli’): the Count had a brother, at whose cradle an old Gypsy woman was captured. The baby became ill and the old woman was accused of casting a spell on him, whereupon she was burned at the stake; a baby’s skeleton was also found in the burnt rubble. As the count’s son was missing, it was believed that the Gypsy woman’s daughter had abducted him, but neither of them was ever found. The old count, however, strongly believed that his son was still alive and, on his dying bed, instructed his other son to continue to look for his brother. Ferrando is convinced that he would be able to recognize the Gypsy woman. As the clock strikes midnight, the soldiers seem terrified.

Castle gardens. Leonora confides in Ines that she is in love with an unknown knight but, regrettably, the war has torn them apart. And then, one night, she heard a serenade sung by a troubadour – that was her knight! She declares that, should she be unable to spend her life with her only love, she is prepared to die for him (aria ‘Tacea la notte’).

Count di Luna wishes to profess his love to Leonora but he is interrupted by the troubadour’s song. The Count demands his name. This is Manrico – not only a suitor for Leonora’s hand, but also an officer of the rebellious troops, against whom Count di Luna, a faithful supporter of the monarchy, wages war. The rivals draw their swords and engage in a fierce duel.

A camp in the mountains. The Gypsies are greeting the sunrise around fires (chorus ‘Chi del gitano’). The flames remind Azucena of events from the past: the yelling throng, the soldiers pushing an old woman onto the stake, and her words: ‘Avenge me! Avenge me!’ (aria ‘Stride la vampa’). Manrico learns from Azucena that her mother was burned at the stake for alleged witchery. She herself stole the count’s baby but – blinded by her grief and anger –  threw her own child into the flames instead. Manrico wants to know whose son he is. Azucena tells him that she has always been a mother to him. He confesses that he could kill Count di Luna in a duel but an inner voice stopped his hand. ‘If you ever have another opportunity to do so, don’t hesitate!’ Azucena replies.

A messenger arrives with news from Ruiz: Manrico and his detachment are to defend the captured castle of Castellor against de Luna’s troops. He also says that Leonora, convinced that the one she loves is dead, intends to join a convent. Despite Azucena’s pleas, Manrico rushes to meet the woman he loves.

Convent near Castellor Castle. Count di Luna still has hopes of conquering Leonora: he will abduct and marry her, even against her will. Before the convent door is shut behind her for good, Leonora wishes to say goodbye to Ines. The Count intends to wait for her but his plan is frustrated by Manrico. Leonora leaves with her lover, and di Luna has to withdraw, outnumbered by Ruiz’s team assisting Manrico.

Encampment of di Luna’s troops outside Castellor Castle, where Manrico and his men have found shelter. Di Luna’s soldiers are preparing for the battle, confident of their victory. A Gypsy woman has been apprehended for loitering around the encampment. Azucena claims that she is just looking for her missing son but Ferrando recognizes her to be the woman who hurled the baby into the fire years ago. The Count can finally avenge his brother: he orders Azucena to be put to death in the same way as her mother.

Castellor Castle. The preparations for Leonora and Manrico’s wedding are underway. The groom tries to calm his bride, fearful of the anticipated assault of di Luna’s troops. Even If he should die, he will meet her in heaven. These protestations of love are interrupted by Ruiz rushing in with news of the imprisonment of Azucena. Manrico gathers a group of soldiers (‘Di quella pirra’).

Outside the tower of Count di Luna’s castle. Ruiz brings Leonora here because Manrico’s foray failed: her lover was defeated and imprisoned in the castle tower.

Leonora reminisces on her love (chorus ‘Miserere’ and aria ‘D'amor sull'ali rosee vanne’). Heard from a distance is the chant of the monks praying for the souls of those about to meet death, and also the voice of Manrico bidding farewell to Leonora.

The Count is relishing his revenge but his triumph is incomplete because he has still not gained the hand of Leonora. And now she is offering herself to him, on one condition: that di Luna should turn Manrico loose. The Count accepts the offer, unaware that Leonora has drunk poison.

The imprisoned Manrico and Azucena’s thoughts go back to their happy days in the mountains. Azucena falls asleep. Leonora brings Manrico freedom and urges him to flee. When he realizes his beloved is not going with him he thinks she has betrayed him and only when the poison begins to work does he understand what has happened. Dying, Leonora confesses the truth to him. The Count orders Manrico to be put to death. On seeing the execution, Azucena tells di Luna that he has just killed his own brother. Her mother’s death is thus avenged.