duration
2 hours 45 minutes | 2 intermissions
composer
Giacomo Puccini
libretto
Luigi Illica and Giuseppe Giacosa according to Victorien Sardou
World premiere
Rome, 14th January 1900
Polish premiere
Lviv, 1903
premiere at the Krakow Opera
Opera stage at J. Słowacki Theatre, 4 May 1997
language
Sung in the original Italian, with Polish subtitles
description
“Tosca” is a part of the standard opera repertoire and has allowed many singers to create unforgettable characters. The opera features some of Puccini’s most splendid arias, “Recondita armonia...” and “E lucevan le stelle...”, interwoven with the story of a tragic love between the singer Tosca and the painter Cavaradossi, who fall prey to the police chief Scarpia’s machinations. As with every great work of worldwide fame, the producers are faced with the danger of rendering the opera too banal or too predictable, but the Krakow Opera’s staging of “Tosca” has a lot to recommend itself. Apart from an absolute vocal mastery, the lead singers show excellent acting skills – their characters are deeply moving and believable. The dramatic story of Tosca and Cavaradossi’s love as seen at the Krakow Opera House moves the audience to tears. 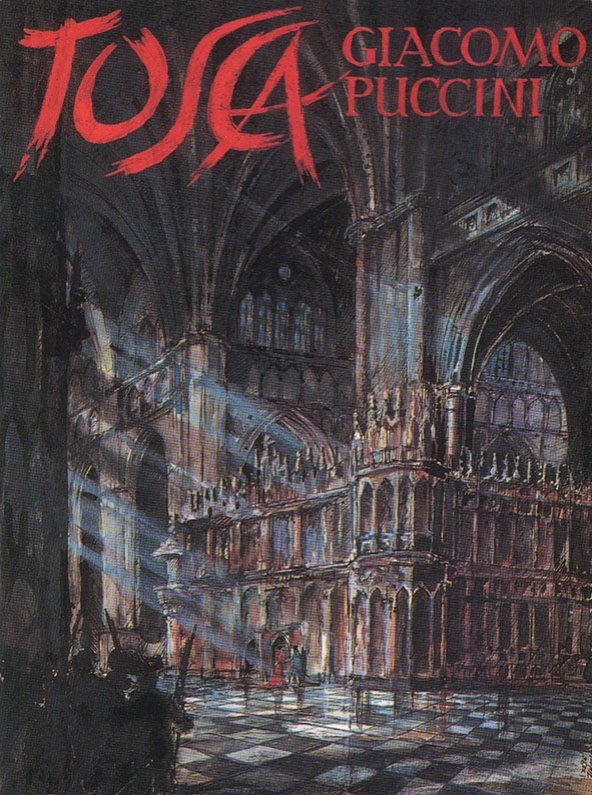 The Church of St. Andrea della Valle, approaching noon. A quick succession of five, rather harsh sounding chords provides a brief introduction to the drama about to unfold. A restless, syncopated tune accompanies the appearance of a nervous looking man in the now completely deserted nave of the church. Upon hearing the sound of footsteps in the distance, he scurries away into the shadowy interior of the Attavanti family chapel. Enters the sacristan, who then busies himself with the preparation of the paintbrushes for one Cavaradossi, an artist working on the picture of Maria Magdalene. The church bells sound off the high noon and the sacristan promptly says his Angelus prayer. And soon enough Cavaradossi himself appears on the scene. Before he actually sets out to continue his work on the picture, he ponders the striking resemblance of the biblical woman on his canvas with the elusive lady often coming in to pray in the church. His loud reflections on the subject (an aria: "Recondita armonia") really shock the sacristan, who rather indignantly comments on the event in clearly audible aside, while slowly taking his leave. The man who had previously hidden himself in a side chapel, now tries to make his exit from church as unobtrusively as possible, but eventually bumps straight into Cavaradossi, who at first fails to recognise in the tattered looking individual his good friend - one Cesare Angelotti, the former consul of the Roman Republic, who - in the wake of its fall and the and the reinstatement of the Ecclesiastical State by the Neapolitan army - had been imprisoned in the Castle of the Holy Angel and just managed to make good his escape. It soon transpires that the elusive lady from Cavaradossi's canvas happens to be his sister, the Marchioness Attavanti, who left behind in the chapel the necessary disguise she would normally use. Their conversation is broken by the arrival of Cavaradossi's beloved, the famous Roman singer - one Floria Tosca. She has been suspecting the artist of having an affair. Her suspicion is further fuelled by the familiar looking features of the woman on the canvas (arioso: "Non la sospiri la nostra casetta"). Cavaradossi somehow manages to alleviate the jelousy of his beloved and convince her of his deep running affection for her (a duet: "Qual occhio al mondo puo sturdi paro"). After she has left, the thundering sound of a cannon shot can be heard, announcing that Angelotti's escape has been finally discovered. Cavaradossi swiftly decides to hide his friend safely away in his nearby villa. A number of people run into the church: the sacristan, followed by the alter-boys and the young clergymen, all of them rejoicing at the news of victory over the army of the consul Bonaparte in the battle of Marengo. Their happy prancing about is stopped by the sudden arrival of the sinister looking and fear inspiring prefect of police, one Baron Scarpia and his henchmen. He has been clearly expecting to find here his much wanted fugitive, although his suspicion also falls upon Cavaradossi, notorious for being articulate with his liberal sentiments. Having accidentally stumbled across a fan apparently lost by Marchioness Attavanti during her hasty retreat, he promptly embarks upon a rather sinister plan: by arousing jelousy in Tosca he might just kill two birds with one stone - make Tosca quite unwittingly help him find Angelotti, the fugitive, and by the same token rid him of his rival in his hitherto most unsuccessful attempts to win her affection ("What a handkerchief was to Yago, a fan would be to me"). The congregation is slowly filling in the empty naves of the church and the thanksgiving service soon begins. The sinister looking Scarpia, with the powerful Te Deum and organ music in the background, starts plotting his conspiracy (grim sounding monologue, rendered in unisono: "Tosca! Nel tuo cuor s'annida Scarpia").

Scarpia's office in the Palazzo Farnese the same day in the evening. The orchestra's rhythm is a background for the introduction to the love duet between Tosca and Cavaradossi from the previous Act. Now, lonely Scarpia is tormented by the thought that the happiness of mutual love is not accessible to him (monologue: "Ha più forte sapore"). The tune of the gavotte is heard through an open window. It is played in the Palace reception chambers where the Neapolitan Queen Maria Carolina is staying. Having failed to catch the fugitive, the guards bring in Cavaradossi. Without concealing his convictions, Cavaradossi refuses to give any testimony. The nervous atmosphere of interrogation is contrasted with a distant solemn cantata, with the voices of Tosca and the chorus. That makes Scarpia try again to use a woman in getting information required to apprehend Angelotti out of the current captive. When Tosca arrives called by Cavaradossi, he is subjected to tortures in the adjacent room. Unable to withstand agonizing cries of her lover, desperate Tosca reveals Angelotti's hiding place. Scarpia orders Spoletta with revengeful satisfaction to arrest the fugitive only when the barely conscious painter is removed from the room. He understands that his resistance and suffering were in vain, and he was betrayed by his lover. At the same time, a messenger brings the news that the winners of the Battle of Marengo are Bonaparte and his French Army. Weakened Cavaradossi starts to sing the anthem of freedom ("Vittoria! Vittoria!"), sealing his fate. After he is removed to a death chamber, Tosca and Scarpia negotiate the release of the artist. The Baron equally denies a proposal of bribery (monologue: "Già, mi dicon venal"), and begging for mercy (Tosca's aria: "Vissi d'arte, vissi d'amore"). The only price that may satisfy him is Tosca herself. In return, he promises to carry out a mock execution, and guarantee safe conduct for the lovers to leave Rome. Desperate Tosca accepts that condition, but, once the letter is written, Scarpia advances to embrace Tosca who catches spontaneously a knife and stabs the hated murderer. Seeing the dead corpse, she is unable to refrain from saying symbolic words: "The whole Rome was terrified by him", and, either directed by bad conscience or out of revenge, she places candles around the corpse, takes a crucifix from the wall, puts it on the corpse and quickly leaves the scene of crime.

The terrace of the Castel Sant' Angelo the day after, about 3 hours before dawn. First, we can hear a motif played by four French horns in unison. Next, come distant sounds of cattle bells, a song of an unlucky shepherd lover, followed by the Church bells, with St. Peter's Basilica in the background. Cavaradossi is brought to the place of execution, but instead of seeing a confessor, in his last wish, he requests to be able to write a farewell letter to his lover. He looks at the starry sky and the dawning day, and he evokes his memories (four cellos summarize briefly the love duet motif from Act I, turning into the theme that accompanies Tosca's concerns in Act II, followed by the clarinet starting the tune which is continued by a male singer in the aria: E lucevan le stelle. But suddenly, Tosca enters with a joyful news that soon their torments will end, and they will regain long awaited freedom. When Cavaradossi shows concern about the possible way of her gaining mercy for him, she admits committing the crime (aria: "Il tuo sangue o il mio amore volea"). The singer's voice is rising in the climax to c3, and falls down by two octaves. Although originally Puccini contemplated only a passage within a single octave, to increase the effect, a practice developed to prolong it by another octave. Now, the lovers are encouraged by hopes and they plan their future (duet: "O dolce mani"), and Tosca relying on her acting experience instructs Mario how to behave during the execution and pretend to be dead. The execution squad arrives, and the protagonist leaves with it outside the scene. Tosca observes the course of events from a distance, and, once the soldiers are gone and the terrace is empty, she rushes to her lover and encourages him to get up and flee with her. Suddenly, she becomes aware that the execution was real, and the painter is dead. In the meantime, Spoletta arrives with the guards since the murder of Scarpia has been discovered. He orders to arrest Tosca. The lady evades the guards, climbs to a wall and jumps into a precipice.